Louise on the Lam, A Foster Mom’s Tale of Love, Rescue and a Tail on the Loose

Louise, a rescue beagle, “the most scared dog in the world”, on the Urgent list at a shelter in West Virginia, finds her way to Sharon Cree’s heart and home in Pennsylvania. Then through a freak incident, Louise goes on the lam. This is Louise’s journey…a tale of love, rescue and a tail on the loose…and the woman who would never give up on her!

If you love dogs, or any animals, this story will touch your heart!

Louise is the most scared dog in the world! Sharon Cree, the Author, sees a photo on her computer of Louise, a copper-nosed beagle with a white splotch on her ear. Louise is living in a shelter in West Virginia. Sharon lives in Pennsylvania. The look in Louise’s amber eyes in the photo on her computer haunts Sharon day and night. Louise is on the “Urgent” list, meaning that her time to live is limited. On Thanksgiving Day, 2005, the shelter where Louise is housed blows up in a gas explosion, leaving the animals living there no place to live. Louise and her sister, Thelma, are transported to a nearby farm with other animals who survived the blast. They will have to live outside in a hog pen over the winter. Sharon’s heart is restless, she feels a connection to Louise…she needs to save Louise, she wants Louise to be with her.

Sharon gets her wish! However, when Louise arrives, things are anything but smooth. Louise is afraid of everyone…and, everything! She even runs from the kitchen when bacon is frying! Sharon is frustrated but determined to help Louise by finding out what makes her “tick.” Despite the variety of her efforts, nothing is working with Louise. Then, in a freak moment, outside at the vet’s office, Louise breaks loose in a busy business district with non-stop traffic and is on the lam! The hunt to find Louise is on! With a heavy heart, Sharon endures days that turn into weeks, with Louise still missing. To find out what happens, you’ll just have to read this book!

This story is a heartwarming tale about love for Louise and the world of rescue from a foster mom’s perspective. Sharon has fostered and placed, with the Furry Friends Network in which she volunteers, over 50 beagles. Within this organization, she is affectionately known as “the Beagle Lady.” 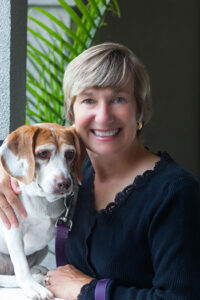 Sharon Tynio Cree grew up in Harrisburg, Pennsylvania. Sharon’s family’s roots stem from the coal regions of Pennsylvania. She has fond memories of spending a few weeks each summer with cousins in the anthracite mining town of Frackville.

As a teenager, Sharon babysat and saved money to take a trip to Europe when she was sixteen. She toured nine countries, from Greece to England. Sharon still loves to travel!

Sharon had two dogs growing up, one, a black and white terrier named Chi Chi, and the other, a purebred Siberian Husky named Nikki . Her love of beagles started when she was in college and bought a beagle named Barney at a local shelter. A move to the college campus to continue her degree brought restrictions against having a dog live with her. This tough decision led to Sharon having to find a good home for Barney. She stayed in touch with the new owners and visited often. Barney turned out to be quite a character, a trait that Sharon continues to love about the beagle breed, their colorful personalities.

Sharon earned her teaching degree from Penn State Middletown campus and taught elementary school. Her job position included first, second, and third graders in the same school district that she attended as a young girl. She taught in that school district for twenty-nine years, finally retiring in 2007.

A call from her sister, Denise, a dog groomer, and also an animal lover, in 2002, introduced Sharon to the world of “rescue”. Both Sharon and Denise volunteer for the Furry Friends Network rescue organization in Central Pennsylvania. Sharon has earned the name “Beagle Lady” within the organization. She has fostered and placed over 50 beagles to good homes. Her work as a foster mother to mostly beagles continues to this day.

Louise, the subject of this book, is a “one of a kind” beagle, the “most scared dog in the world”. Louise’s photo on the Internet on Sharon’s computer tugged at her heart, and so the adventure began! Louise finally arrived to Furry Friends Network in Pennsylvania in a transport from a shelter in West Virginia in late December, 2005. Sharon’s dedicated efforts to rehabilitate Louise were not working. Louise was even afraid of bacon frying on the stove! And, then, in a freak incident, Louise got loose, outside at a vet’s office, nearby one of the busiest highways and business locations in the area! Frustration ensued as Sharon and her husband, Ray, searched for Louise high and low, day and night, for weeks. You’ll just have to read the book for the rest of this amazing story.

“Beagle-mania” continues at the Cree household with their “Cree-gles”, what they call their own beagles, and fosters who come and then go to their forever homes.

Sharon and her husband, Ray, and several beagles, including Louise, live in Dauphin, Pennsylvania. Their two daughters, Jessica and Alicia, are grown and also live in the area. In October, 2014, Sharon and Ray became grandparents to Tanner Ray, son of Alicia and her husband, Chris.